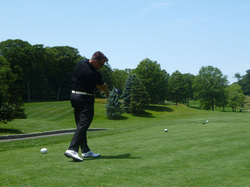 
RYE, N.Y. - Dan Greto spent Monday on the links instead of going into the office, but it was all for a good cause.

"It's a great way to raise awareness and money," said Greto, who participated in and helped sponsor a golf tournament on Monday at the Apawamis Club to benefit medical research related to children born with congenital heart defects (CHD).

The inaugural tournament was organized by nonprofit organization Colin's Kids, Inc. based out of Greenwich, Conn.

Participants paid $400 for an 18-hole game with groups of four each starting at a different hole. There were 72 people reportedly registered at tee-time, bringing in $28,800.

Lunch and dinner were included in the registration fee with at least an additional 50 people attending the dinner at $95 a head, bringing in another $4,750. 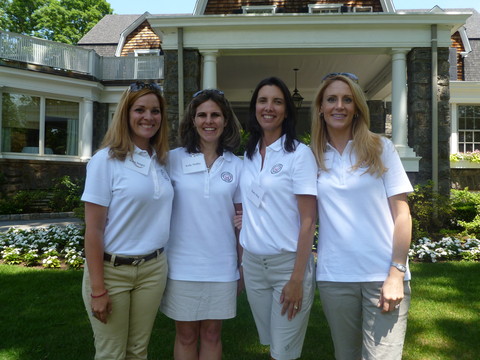 Kara Seeger (left), Kelly Molloy, Nancy King and Suzanne Knesich serve as volunteer board members for Colin's Kids, Inc. Photo By: Ryan Villarreal
Colin's Kids was founded in 2010 by mothers Kelly Molloy and Nancy King who had met in a Columbia Presbyterian's Neonatal Intensive Care Unit in 2008 after giving birth to children with CHDs.

The Kings' son Andrew survived after surgery, however, the Molloys' son Colin did not and became the organization's namesake.

The organization hopes to raise money and awareness for treating CHDs and providing families in need with financial assistance for such treatments.
Greto is a close family friend of the Molloys and has come to learn more about CHDs through his association with them. He said the key to increasing funding is by raising awareness.

"Hopefully if one person learns about it, they can tell ten others," he said.*