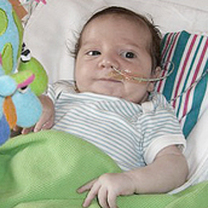 When I was 11 weeks pregnant with our second child, a routine nuchal fold scan delivered terrifying results. We were told the reading was "catastrophic", that in all likelihood there was a chromosomal abnormality, that I would never go full term with the pregnancy and that our options were to "terminate immediately, let nature take its course, or go for additional testing. " We had a Chorionic Villus Sampling (CVS) test done the following week. Another week later the chromosome results came back completely normal, but we knew that we were not out of the woods.

At the 17 week ultrasound, a joyous occasion for so many expectant parents, waiting to find out whether "It's a boy!" or "It's a girl!", we found out our son's congenital heart defect diagnosis, Hypoplastic Left Heart Syndrome. In layman's terms, his left ventricle was not forming properly. The ultrasound technician could see there was something wrong, the perinatologist suggested the diagnosis, and at 7:30 on a Friday evening, our dedicated pediatric cardiologist confirmed the diagnosis. It was only a few short weeks until Christmas. We shared the news with no one.

The plan was to immediately transfer all of my care and all of the baby's care to New York Presbyterian-Morgan Stanley Children's Hospital (MSCH). Immediately after his birth, he would have the first of three open heart surgeries over the course of approximately 24-36 months. We prepared ourselves mentally and emotionally. We researched everything we could about HLHS. When we were ready, and the holidays were over, we began slowly sharing the news with our family and close friends.

Colin was born at 11:55 on Monday, May 5, 2008. He was 8 lbs 8 oz, 19 inches long. He looked like the perfect baby boy and, other than his little heart that needed some help, he was. He was taken from the delivery room to a special neonatal intensive care unit (NICU) before I could hear his first cry. The nurses and doctors at MSCH immediately went to work caring for him and monitoring him. Monday evening, our parish priest, Monsignor Patrick Boyle, came down to the hospital to baptize Colin. Tuesday morning Colin went in for the first of his open heart surgeries, by Friday he was off all pain medication and his chest was closed back up.

Colin spent 5½ weeks at the MSCH NICU before he was able to come home. A little bit longer than anyone expected, but we were thrilled and more than prepared to finally bring him home, feeding tube, medications, pulse oximeter machine and all. The following week, after a beautiful day together, Colin went into cardiac arrest, due to a blood clot near the stent in his heart, and passed away in the arms of the people who loved him most. He was 47 days old. In that short 47 days, this brave little boy gave us a Mother's Day, he gave us a Father's Day and he came home to be a little brother to his big sister Madelyn.

When I was pregnant with Colin, I read a memorial a mother had written about her child who had also passed away from HLHS. She said that even knowing the outcome and all the heartbreak that followed, her decisions would not have changed. It was impossible for me at the time to understand her strength and conviction, but I believed her. I prayed that if my child's fate was the same, I would know and understand those same convictions, and I did. The 47 days I was able to hold my beautiful son was worth all the anxiety leading up to his arrival and all the heartache since he left us. He is our Little Angel.